During the times of slavery and the Civil War, there was something called the Fugitive Slave Law that covered even the “safe” Northern territories. This law made it illegal to assist a freedom seeking slave and to turn him or her in to the authorities if found. If you did not comply with this law, you would be fined $1,000.
What if the authorities didn’t find out? Well, that’s a good question. Many of them didn’t. In Ercildoun, the heavily Quaker community shared in the common belief of anti-slavery. Most neighbors did not rat each other out. There was the occasional dispute between neighbors with different opinions on the matter, but the Fugitive Slave Law was rarely enforced in this area.


After the Civil War, many freedom seeking slaves built a life here. According to Historic Resources of East Fallowfield, men by the names of Jacob Carter and Samuel Ruth created the Christ Disciple Church in 1894. Services were held there and later in People’s Hall.
The daughter of Samuel Ruth, Isabella Stokes, had this to say about People’s Hall in a 1974 written piece provided by Historic Resources of East Fallowfield:

“One old building still stands,
As a tribute to voices now stilled,
It stands as a monument to Old “Friends”
Who dared to do right.”

In our previous posts, we state that after the war, people held church services in People's Hall. It was then Ercildoun's local library and a polling place for voting. It also served as the meeting place for the area's Historical Society. 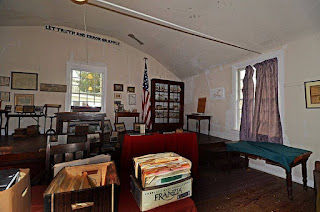 The common practice of neighbors helping neighbors in East Fallowfield existed long before Triple Fresh. However, it is very important that we take that same value and attribute it in our store after all these years.
Whether it was something big like Underground Railroad assistance, or just being a friendly face in the neighborhood, we at Triple Fresh are very proud to be a part of this long history of giving, helping, and community.
We hope you are enjoying this mini-series about People’s Hall, Ercildoun, and the rest of East Fallowfield Township. Make sure to like the People’s Hall Facebook page if you haven’t done so already!
Sources used for this piece: Historic Resources of East Fallowfield Township, Ercildoun: A Quaker Village In Chester County, PA by Janet Polk Morris,
at January 21, 2018