To All of Our Friends and Customers,

We at Triple Fresh are very sad to learn of the passing of our former butcher, Tony Madrigale. Tony worked at this location for the Websters for 20 years. When we bought the store in 1987, Tony continued to work as the full-time butcher. In 1989, he became our part-time butcher until his retirement in 2015. He worked every Sunday and Monday, never missing a day of work.

He was beloved by his coworkers and his customers. Most loved to get "special cuts" from Tony as only he could do them. He would carefully merchandise every package that he processed always explaining to us that "you have to show them the meat."

Tony was an old school butcher that taught us how to cut and sell fresh meat. He was very instrumental in our success and we are forever grateful.


"Like many people in the East Fallowfield area, I grew up with Tony as a fixture in the meat department at Triple Fresh.  I had the opportunity to work with him on and off for the last 25 years.  The “on and off” part was because of me, not Tony.  Tony knew my brothers, sister and I since we were the kids that would run around Hershey’s and (I’m sure – though they wouldn’t tell us) just get in everyone’s way.  I was the one over the last 25 years that has come and gone – school, other jobs, different departments in different places – meanwhile, Tony has soldiered on behind the wall in the Meat Department for over 40 years.

Tony always has a smile ready for me when I venture behind that wall.  Growing up, he would always ask how I was, how school or work was going and, with a slightly mischievous smile and that Tony chuckle, what my brothers were up to these days.  Today he asks how my wife and son are, and listens to my mundane stories of life outside Triple Fresh with a knowing look and 84 years of experience in his eyes.

Tony has retired many times over the years, each of which amounted to a reduction in hours, the sort of “retirement” that one would expect of a worker like Tony.  Every Sunday and Monday (and sometimes other days as well) Tony arrives at Triple Fresh.  He pulls in the lot regardless of circumstance or weather.  There was at least one occasion that we assumed that Tony wasn’t coming due to the prodigious amount of snow, only to be surprised to see him walking toward the building, ready to work, surprised at our concern.

Often, one will find Tony in the break room on his coffee break with a (microwaved to the point of boiling) cup of coffee in hand, sitting back, taking it all in, saying hello and conversing with anyone passing through the break room.  There have even been a few times Tony would catch a quick nap during his lunch break.  Each new person assigned to be Tony’s “meat wrapper” came away from their first day with a new friend.  Sure, Tony has had his favorites through the years, but everyone was always treated to a smile, a patient training session and a nice conversation.

Tony is the kind of guy that brings customers back.  Never too busy to stop and talk about cuts and cooking times, Tony is sought out by Triple Fresh regulars for advice.  He was my go-to guy for many of my custom-cut birthday filets.  My Dad credits Tony with being the source for much of his meat-cutting abilities.  His influence can be felt whenever you look into the meat case and will be for a long time to come.

The old-school flavor Tony brings to this modern, fast-paced society is a truly endearing quality of the man behind the wall.  Though he is not one to talk about himself, if you ask the right questions, you might get treated to a brief anecdote about his time in China following World War II or about skinning calf’s heads as a young man starting his trade.  As I look back, I wish I had asked more of these questions in the times I could have, tapped into the vault of experiences contained within the man."

-An excerpt from Jim Petro III's tribute to Tony and his legacy here at Triple Fresh and Webster's.

In 2015, The Town dish came out to Triple Fresh and did a story on our meat department and most importantly, the ones who tirelessly work to bring you the freshest and quality meats. Tony Madrigale is specially high lighted in this piece as someone who knows his craft and is willing to give insight on what makes a good cut and how not to cook meat. Click this link to read more: https://www.thetowndish.com/news/2015/meet-the-meat-guys-of-triple-fresh-market/

In 2015, Tony said goodbye to Triple Fresh and hello to retirement. He couldn't leave without a few words goodbye from his coworkers. Pictured here is his last day on the job 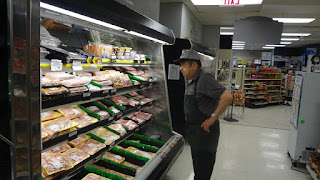 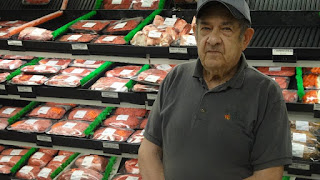 Thank you Tony. You will be missed.