The year was 1845. The abolitionists (people who were anti-slavery) wanted a place to gather to conduct their meetings without fear of violence towards them. This was during the time where acts of violence were plaguing places like Fallowfield Meetinghouse and Lancaster County where pro-slavery mobs were attacking anti-slavery meetings. The Pennsylvania Hall in Philadelphia was burnt to the ground by one of these pro-slavery groups.

A woman by the name of Margaret Coates sold the land to Nathaniel Walton, Mary Coates, and Lukens Pierce, among many others, for 50 cents. This was documented in a deed that was signed May 13, 1845. 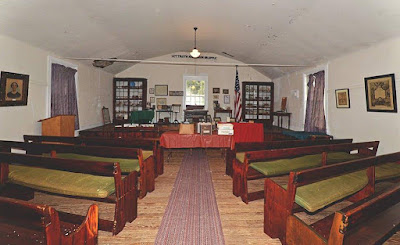 Lukens Pierce was related to Gideon Pierce who was the original owner of the Triple Fresh building. Margaret and Mary were related to the Coates family, the namesake of Coatesville, Pennsylvania. Nathaniel Walton was a member of the Walton family. The Walton family is among the handful of families that were heavily involved in the Underground Railroad in the East Fallowfield area.

The building was completed in 1847 and was ready to serve the community and the people of Ercildoun. In its beginning years, it was referred to as Free Hall.

Even though the meeting place was founded by Quakers, you didn’t have to be a Quaker to join in on the discussion. According to the signed deed, the People’s Hall guided their membership through this practice: “…A free hall, to discuss any and every subject of interest in Religion, Morals, Physics, Politics, or any subject of interest to the family of man irrespective of clime, class, sex, sect, or party.”

Practicing what they preached, no slave owning Quakers could join unless they freed their slaves. Those who failed to comply were disowned by the Quakers and unable to join People's Hall.
Sources used: Ercildoun: A Quaker Village in Chester County, PA by Janet Polk Morris , Deed for People's Hall written by Margaret Coates.
at January 21, 2018