The weather has been awfully strange so far this year. All of this inconsistency had us pondering about the great tornado that hit Ercildoun in July of 1877. Yes, a tornado. According to some sources, this particular tornado was studied in some college courses.

An eyewitness account that was documented in Ercildoun: A Quaker Village in Chester County, PA spoke about the big storm and its aftermath.

The account tells the story of Mr. and Mrs. Darlington who were living in the Ercildoun Seminary at the time. They were the only ones there since all the other children went on break. It was late in the afternoon when Mrs. Darlington alerted her husband of a loud rumbling noise. He tried to tell her that it was just a strong thunderstorm. He was proven wrong when he approached his window and saw an insidious funnel cloud coming right for them. As soon as they could process what was happening, the upper floor of the seminary was non-existent.

Mr. Darlington’s new stables, house, and carriage were destroyed in less than a minute. His heavy cow was flown over a 20 ft hedge and landed in his neighbor’s yard. 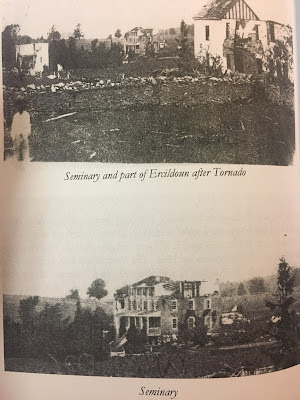 Another resident by the name of Emma Scott Tracey was not around at the time of the tornado, but her family would always speak of how great their house and property was pre-tornado. Tracey would say, “The yards were beautiful as our neighbors’ Dupont Longwood Gardens.” Her family’s property was restored but their large property was turned back into farming grounds.

The damage that this storm cost was about $36,000. The Fallowfield Meeting House was not harmed by the dangerous winds.

Two years later in 1879, physical evidence of the storm was mostly gone and the properties were either rebuilt, or the rubble was cleaned up.

To learn more about the interesting history of Ercildoun, think about purchasing Ercildoun: A Quaker Village in Chester County, PA written by Janet Polk Morris.
at January 25, 2018